Last night's event featured something new on the server: boat jousting, where players faced each other in naval battles trying to be the last person standing. The water layer was thin, with a full lava lake waiting underneath. Anyone who would lose control or get knocked out of their boats would risk falling in and burning!

Several rounds were fought. The first set involved pure PvP, while the latter segment involved various boat-riding mobs that would target the unsuspecting combattants as they tried to off each other! andromedea1, blu35p4rr0w, cmzangetsu93, ChargeDaCreeper, Meota, RoxasTheAwesome and xLordItachix entered the fray hoping to win, while others watched the ongoing event from the stands. After all this carnage, three winners emerged!

Additionally, Meota was randomly picked as the lucky winner for a stack of poppies! 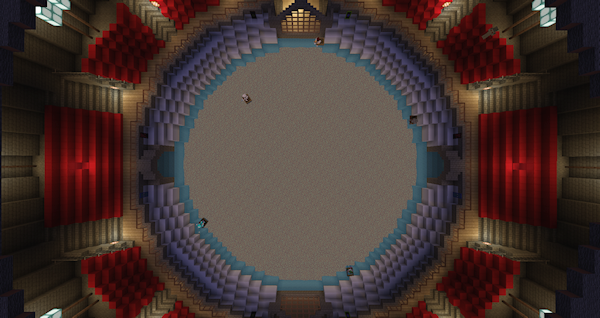 The new arena, the Mausoleum of Theodoric, is now available through the End of Time (PvP and Battles category) and will be opened during future Events Night for all your marine battling needs. Please note that the arena, although functional, is still under construction!

My thanks go to everyone who participated or joined in to watch the event, with a special mention to Skreelink for contributing the 100 levels and helping with the construction work!
[Source]
Page : 1