The forums have received a major upgrade! Read on for the details!
Page : 1
HollowTorment
Interordi's Lovable Jerk

..so is there a series summary online anywhere I can read? A thorough one?

HJ's fanart of it always looked really cool but the game's art design makes me want to barf so I can't play them.

You don't wanna play 'em? Why not?

~STORYTIME WITH DJ~
It's like, a bajinity years after Zero-4 and some dude named Serpent is the badguy.

... no, wait. You weren't supposed to know that yet. Erase it from your mind. ERASE IT.

So, this Serpent fellow who runs a not-ominous-at-all sounding company called "Slither INC" is the "Hero of the people". Humans and reploids have managed to build a civilization in a city I can only assume is what eventually became of Area Zero. And apparently Serpent and his gan-... I mean, COMPANY, are responsible for protecting the city from maverick threats, because Mavericks weren't a thing that just stopped magically existing for any reason.

The story begins when our transgender hero, Ventaile, f***s up a delivery and their boss, Zero, comforts them by telling them if they train really hard, they can be the BESTEST mobile logistics-technician that ever graced the WORLD CUP.

Oh, and I guess Zero isn't really Zero, but some guy named Giro. But we can call him Zero because who cares.

So anywho, some mavericks shoot the ever-loving daylights out of Alivent's hotrod motorcyclemajigger and BOOM, hesheit falls off a cliff. Zero's response is to ask Ventilla if they DARED to drop the damn package because that's, like, the fifth time TODAY god-dammit and he's ALL out of inspiring speeches by now.

Alventus replies by stating, hey. This fuggin' rock is FLOATING OFF THE GROUND, so... technically it hasn't been dropped YET. That counts, right? That totally counts.

But as it turns out, this rock-with-a-face is actually some kinda device that holds THE SOUL OF MEGAMAN X WITHIN IT'S CONFINES. X takes one look at the gendermess in front of him and decides he's totally into that. THE POWER IS YOURS.

And so Venatile is graced with the power of MODEL X and fights for truth and justice and punishes evil IN THE NAME OF THE MOON. He/she/it goes on to fight a bunch of obligatory bosses that all have pieces of other Rocks-With-Faces in them that contain the souls of Fafnir, Leviathan, Harpuia and Phantom respectively.

Oh, and Zero dies... I guess? Or was it Giro. Y'know what? Who cares. Aventilly gets the rock he was holding (which is ALSO ZERO), and gains access to model ZX, and you never switch out of it for the entire game because it can do everything except fly (and that's when you switch to Model-Hx just to get those parts out of the way and then switch RIGHT BACK to ZX).

Throughout the adventure you find out that Serpent was actually THE VILLAIN ALL ALONG, and depending on which gender you identify with most, you were the legendary chosen heroine, or you're like Sonic and just picked up the hero-keys out of nowhere to be absolutely badass.

Where was I? Oh yeah. Serpent. The villain. Big shock, right? So it turns out he's been digging up the SUPER EVILEST MODEL OF THEM ALL, which contains the soul of old man Weil from the Zero Series because why the flurp not?

But because you have the power of mighty Hermaphrodite on your side, you cannot lose (also, spam Model H's charge tornado attack on his second form. SPIN IT TO WIN IT). The snake, flabberghasted that he could lose to a confused little man-girl like you, EXPLODES and everybody lives.

Except Zero. Because he died. Remember? And he's never coming back. Ever.

And that's the story of MegaMan ZX. Stay tuned for ZXA!

I came here to write a silly summary myself, but there's no way I can top that!

Hollow, one thing isn't 100% clear for your post. Were you looking for a summary of only the ZX series, or both Zero and ZX? You mention HJ, so I'm guessing that this extends to the Zero series as well.

I know what you mean with the art style, though. The X series has all these super-slick and smooth designs, then 100 years later everything is bulky and half the bosses look like they've got 4 eyes. The designs aren't bad, but they don't give an impression of progress.

I dunno what everyone's complainin' about. I do have to agree that the bulky designs give the appearance of a step backward in technology, though.

Although, if you think about it, it kinda fits.

MegaMan Zero was set in a universe where the whole Reploid/Human relations thing went completely sour. So it makes sense that the only reploids that appear to be human are being hunted by Neo Arcadia, or are one of the four Guardians and Copy-X, because they are the faces of Neo Arcadia that humans need to care about.

After that, all other reploids are just robots built to kill, so nobody cared about making them look nice anymore. It was all about functionality. If you wanted a reploid to look nice, it was only for better relations with the humans they were killing other reploids to protect. And, again, that fell upon Copy-X and his Guardians, alone.

And after that, reploids became so human-like that they're indistinguishable aside from the upside-down triangle on their foreheads. So Reploids have effectively been separated into two groups.

First Group: The reploids that actually care about appearing human, and do so to an astonishing degree.

Second Group: Reploids created solely for combat who couldn't give two flying sh*ts how pretty you think they are.

Guess which group the bosses tend to belong to? :V


They will always count where it really matters.

I know what you mean with the art style, though. The X series has all these super-slick and smooth designs, then 100 years later everything is bulky and half the bosses look like they've got 4 eyes.


lmao, exactly. I just cannot play the games, they're so..disorienting. It's weird.


Quote:
After that, all other reploids are just robots built to kill, so nobody cared about making them look nice anymore. It was all about functionality.


Well, if it's all about functionality...why not just make massive megatanks of doom on an assembly line?

And yeah Doc, I wanted both series' summary if it's possible.

Quote from post #231716:
Well, if it's all about functionality...why not just make massive megatanks of doom on an assembly line?


I imagine they did, but for the benefit of the player who is just a little man with a sword and sometimes a gun, they decided not to throw those at you.

Quote from post #231716:
Originally posted by HollowTorment
Well, if it's all about functionality...why not just make massive megatanks of doom on an assembly line? 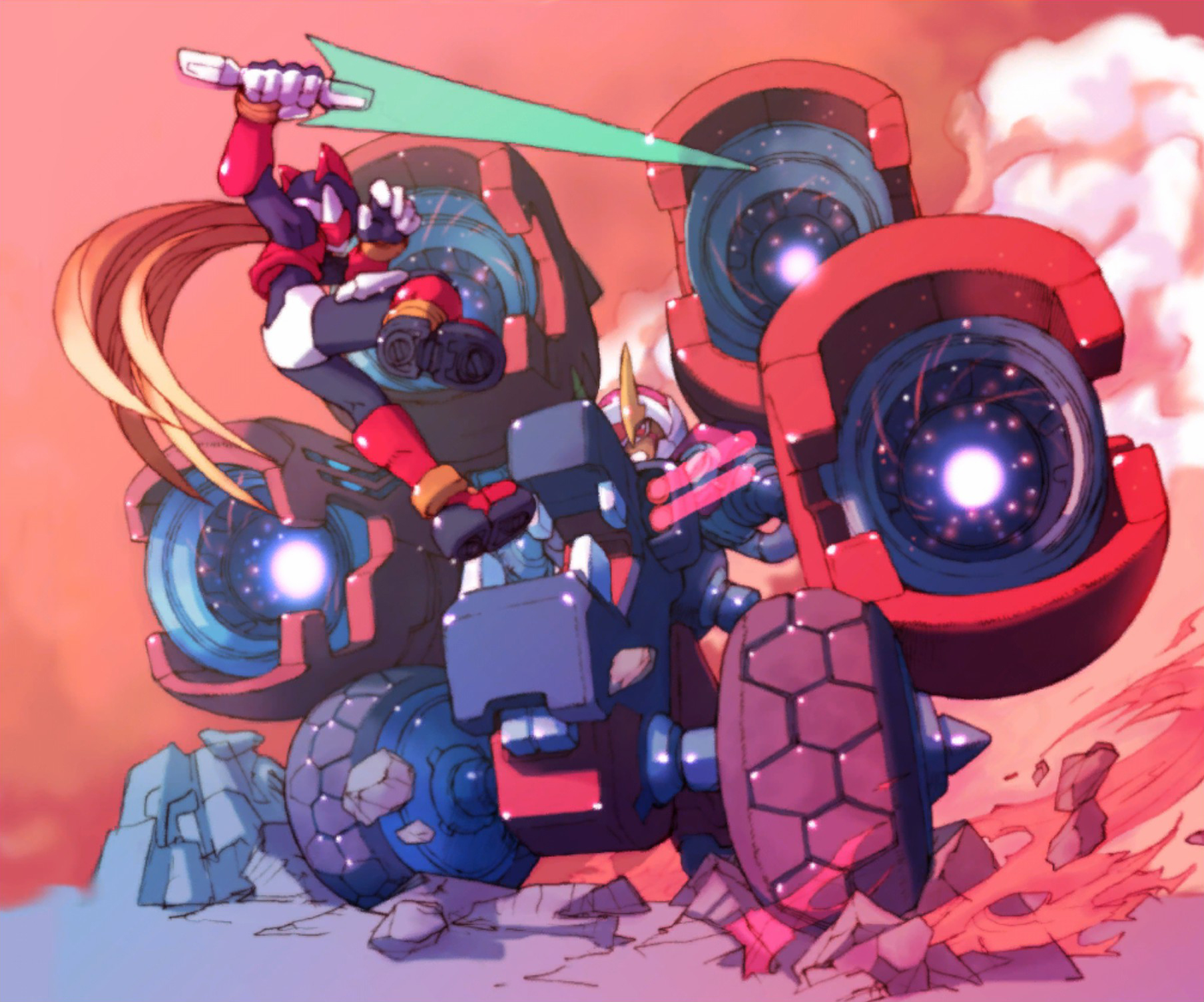 As far as art styles go, I imagine they went with it in order to help create that link between the mmx and legends series. The legend style was pretty blocky when you think about it.

Despite the interesting art style, you should try playing it, even if you play it using *cough*certain*cough* means. It's a pretty enjoyable series. =)

*Damashki stares at you evily. He keeps looking at you, the link below, and back to you*
Graaaagh...