Someone pointed out that it'd been a while since the last building contest, and since it's officially the spooky season I guess we're in luck! The village of Woodhollow sits surrounded by the haunted forest of Hangedman's Noose, and it's looking a little grim lately. A new resident has taken up in the mansion consumed by the forest's snaring trees, and he (it?) is looking for a few brave souls to...Beautify his front yard.

To reach this desolate place, you'll need to take the main Southern Line to Eden Bay nether station, and head to the third floor for the rail to the Kaikon Nether Hub. From there, hop on the rail to the Wardhaven Capital City, and you'll find the rail straight to Woodhollow once you're there. Watch your step outside; there's a little bit of the forest creeping along the ground!

Across the covered bridge to the north of Woodhollow you'll find a series of plots in all manner of non-standard shapes and sizes. Your task this time around is to spread some spooky holiday cheer by building the creepiest creation you can muster. Anything from pumpkin patches to graveyards to broken down buildings and ramshackle wells is fair game - just keep that cute junk out of here!

There are just a few rules that all participants must abide by:

- These builds should be creepy/spooky/scary/potentially macabre within reason. This is a haunted forest and mansion, after all! (You can disregard those pink curtains on the top floor...Those are for later...)
- Although plots have no direct lines, try to stay relatively within the fences! An overhanging block of leaves and the like is acceptable provided that it does not in any way impede the builds neighboring you, or the path between the plots.
- Builds may be a maximum of approximately 20 blocks from the lowest point of your plot's natural landscape. That being said, some smoothing of the ground is allowed to fill in gaps and open floors. When in doubt, ask for clarification!

As an added bonus, we've rigged up a series of 10 decorative head traders for use during the contest (pictured below). Each copy of each one costs only a single, uncarved pumpkin. While you're permitted to take extras for personal use, these particular dispensers will be removed after the end of the contest. They may feature again later at Moosemart, but until then, get 'em while they last!

Builds will be judged on adherence to the theme, use of space, and general quality. The contest starts NOW and will run until 12am EST, Sunday, November 10th. All entries should be finished by then and ready for judging, so we can pick our Top 3 Winners!

Now I'm sure you're itching to know what you stand to win from this madness, and the prizes are as follows:

- 1st Place receives 30 Merit Points, and a Woodhollow Gourd; a fancy new helmet (not a pumpkin!) featuring Aqua Affinity, Depth Strider 3, Protection IV, Knockback Resistance, and a boost to your speed ( 0.1), PLUS enough Respiration to keep you breathing underwater infinitely! They'll also receive the 2nd and 3rd Place prizes, sans Merit Points.
- 2nd Place receives 20 Merit Points, and a Woodhollow Lantern; when held in the offhand this accessory boosts your attack ( 0.05) and movement speed ( 0.05) and gives you resistance to knockback...With the unfortunate side effect of luring monsters to your position with its bright light. They'll also receive the 3rd Place prize sans Merit Points.
- 3rd Place receives 10 Merit Points, and 3 bottles of "delicious" Pumpkin Juice; take a drink and you'll run with Speed 3, Haste 3, Night Vision 3, Saturation 3, 60% Speed, and 30% Attack Speed for a solid 80 minutes! It even makes you Glow!
- All other participants will receive 1 Merit Point for submitting a completed entry! 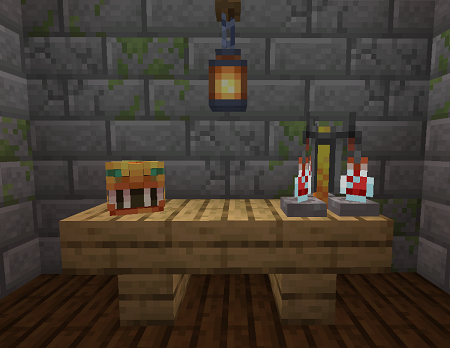 And with that, we're off to the races! Good luck, and don't die...
[Source]
Page : 1
No comments have been made yet on this content.